How To Cook Bacon In A Toaster Oven

It’s hard to cook bacon perfectly in a regular oven. The fat often leaks out and the bacon gets crispy on the outside but raw in the middle.

Nobody likes undercooked or overcooked bacon. It’s either too greasy or tough.

We will show you how to make perfect bacon in a toaster oven with this easy guide. You’ll get evenly cooked, crispy bacon every time without all the mess and hassle of cooking it on a stovetop.

Cooking Bacon In A Toaster Oven 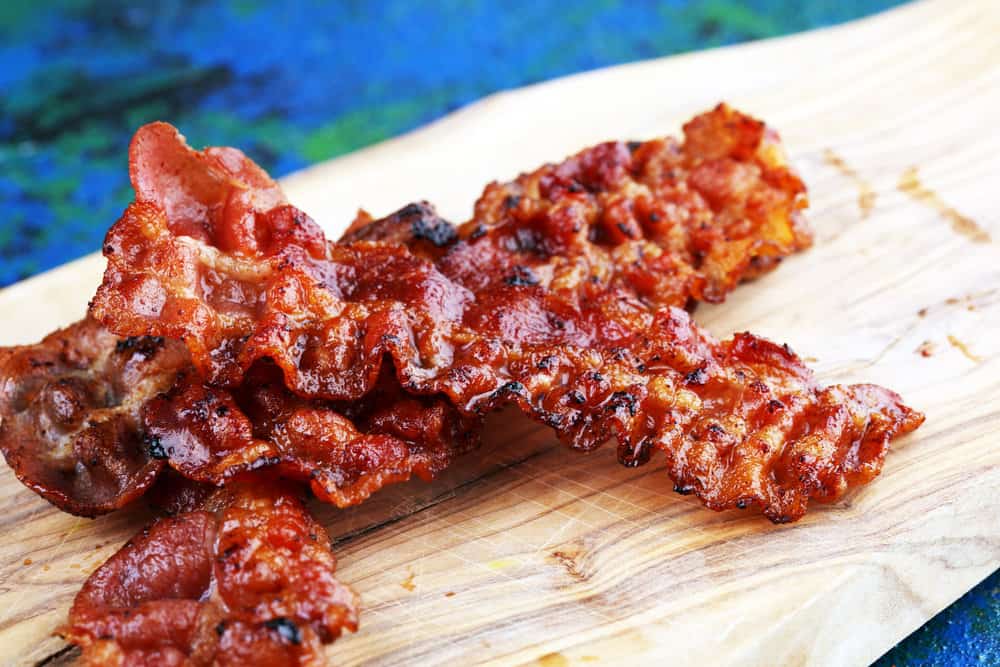 Cooking bacon in a regular oven can be messy and there is no guarantee that the bacon will turn out exactly as you want it.

The easiest way to cook your bacon is in a toaster oven. The even distribution of heat allows the fat to drip off the sides and leaves you with evenly cooked, crispy bacon every time.

Step 1: Line your toaster oven tray with aluminum foil or parchment paper. This helps when it’s time to clean up because you can throw away the used aluminum foil and not have a big mess in your kitchen sink.

Step 2: Place bacon on the toaster oven tray. Make sure to leave enough room in between each piece of bacon so that when it cooks, the bacon grease can drip off and you’ll wind up with crunchy bacon instead of chewy/raw bacon.

Step 3: Place the tray on the middle wire rack when your toaster oven is preheated to 325 degrees.

Step 5: Enjoy! You’ll get evenly cooked, crispy bacon every time without all the mess and hassle of cooking it on a stovetop. 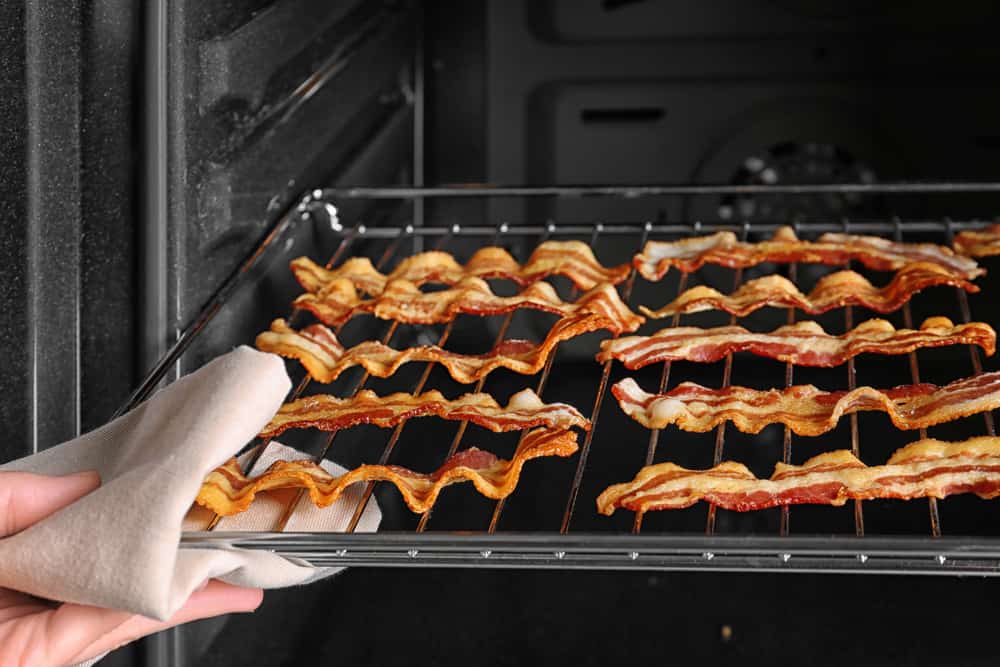 Toaster ovens and convection ovens cook bacon all the same way; however, there are a few differences between these two appliances.

Both appliances work great for baking bacon evenly and thoroughly leaving you with crispy, perfectly cooked bacon every time.

A toaster oven is typically smaller than a conventional oven and uses little electricity while cooking your food. It can toast bread, cook meat and vegetables as well as small baked items such as cookies.

A convection oven cooks food evenly, often reaching a lower cooking temperature than a conventional oven, and uses less electricity than a toaster oven. It usually has several racks so you can bake or roast several dishes at once and is also used to broil meat and vegetables. 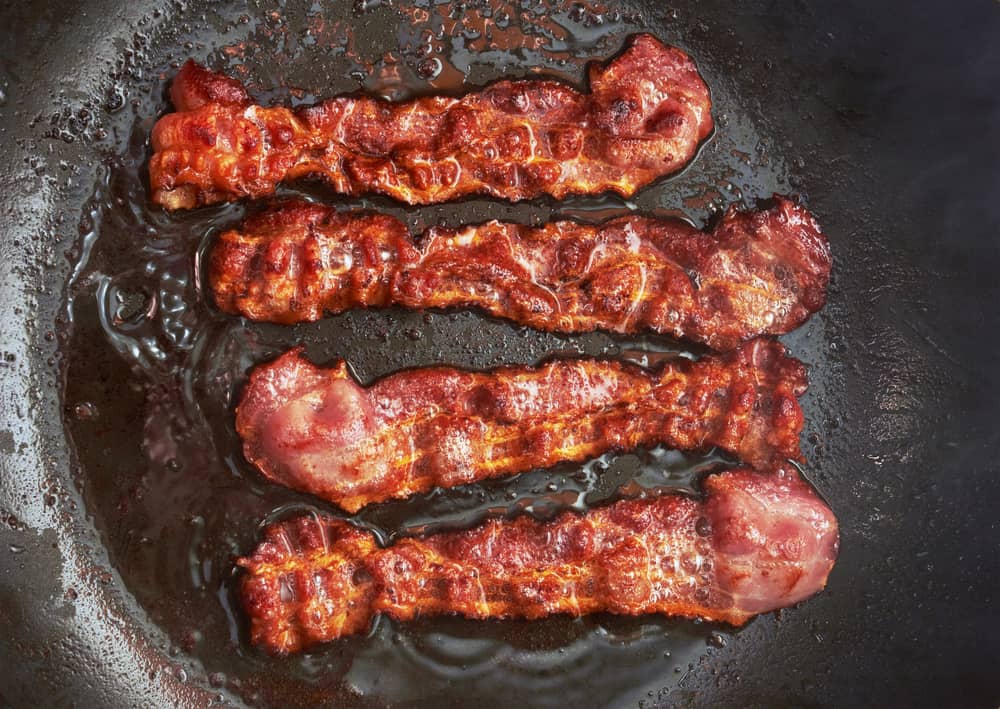 Cooking bacon on a stovetop can be challenging. It has a tendency to curl and the bacon fat often melts out resulting in burnt, chewy bacon.

However, if you have a large griddle, skillet, or frying pan that covers two burners, you can easily cook your bacon on the stovetop without having it curl up into oblivion or leak all of its excess fat.

Frying bacon on the stovetop is as easy as placing a large frying pan or skillet over two burners and cooking several bacon slices at once until crisp. The nice thing about cooking it on the stovetop is that you can cook more than just one slice at a time and it’s easier to keep an eye on to ensure it doesn’t burn.

You just have to watch out for that hot bubbling oil when cooking it in a skillet or griddle. 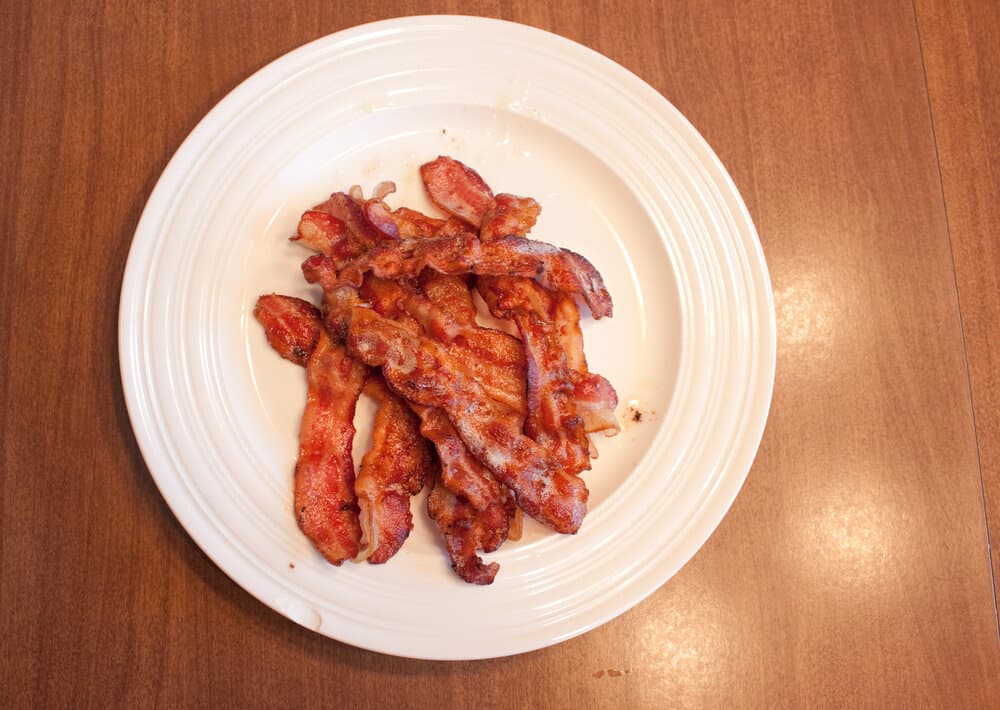 Although we don’t recommend it, making bacon in a microwave is also an easy task.

However, microwaving can produce unevenly cooked bacon with some pieces more done than others; as well as produce chewy/raw bacon that doesn’t crisp up like bacon cooked in a regular oven or frying pan. That’s why we recommend using the microwave only to defrost frozen bacon and not fully cook it.

When making bacon in a microwave, you simply lay the bacon slices out on a paper towel, microwave-safe plate, or parchment paper and cook them for 3-5 minutes depending on how much bacon you’re cooking.

You may need to rotate it halfway through the cooking time to ensure even cooking. For more evenly cooked bacon use the oven or stovetop methods.

Cleaning bacon grease off of dishes is challenging. There are two popular ways to do so.

One way is to put water in the dish and let it soak for a few minutes before washing it as usual. This can be difficult because the excess grease hardens when mixed with water leaving you with a glob of cheese-like substance that’s hard to get off of the dish.

Both methods recommend using a paper towel to scoop up the grease after the grease spatter has soaked.

There are also plenty of DIY natural cleaning recipes to help you get the job done.

Bacon is a delicious treat, but like other foods, it has its good and bad points. Bacon isn’t healthy if eaten in large quantities; however, it’s not the worst choice either.

For example, bacon is high in sodium and saturated fats which can cause health issues such as heart disease and obesity. It also doesn’t contain much protein, but it does contain a good amount of vitamins and minerals such as selenium, niacin, and phosphorous.

In conclusion, bacon isn’t the healthiest food you can eat, but if eaten responsibly in moderation it shouldn’t be too much of a problem. It’s just part of a healthy diet that should consist of other types of healthy foods as well. 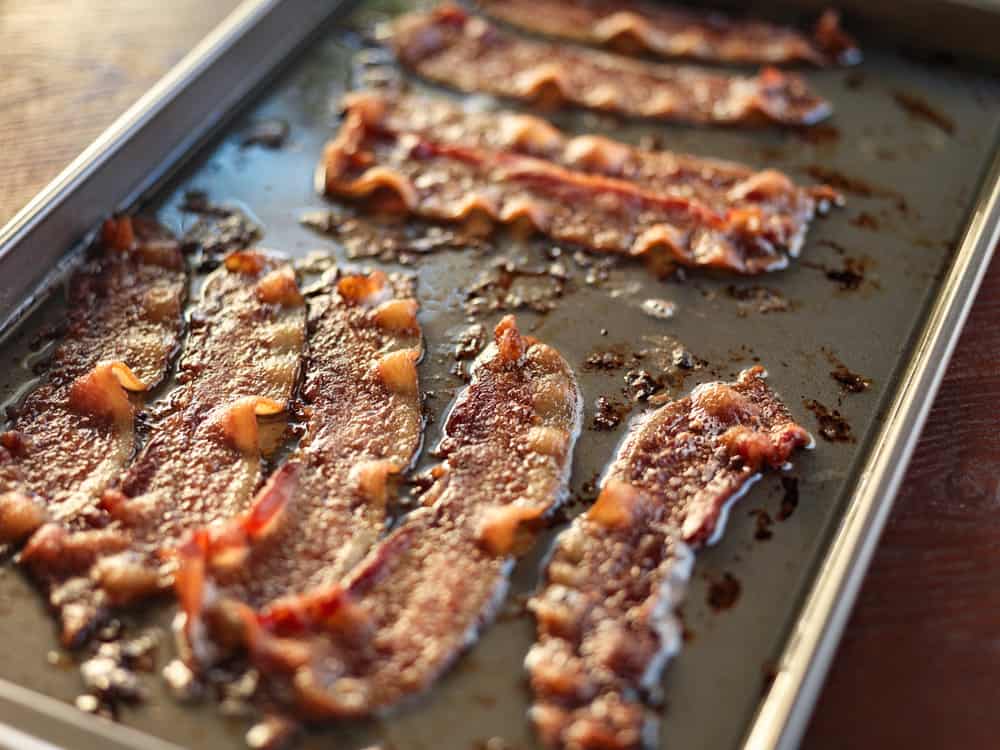 Can bacon be cooked in a toaster oven?

Yes, toaster ovens are the best appliances for baking bacon. It cooks evenly without all the mess and hassle of cooking it on your stovetop.

Does a toaster oven cook bacon faster than a regular oven?

No, both appliances cook food at about the same speed. A toaster oven may preheat faster because it is smaller than a conventional oven and uses less electricity.

What is the best way to cook bacon in a toaster oven?

The best way to cook bacon in a toaster oven is by cooking it on low heat. This will prevent the bacon from becoming too crispy or burnt. To cook the bacon on low heat, start by preheating your toaster oven to 325 degrees Fahrenheit.

What should I set my oven to for bacon?

For toaster oven bacon, start your toaster oven and preheat it to ~ 325 degrees Fahrenheit. Bacon cooked at this temperature will result in perfectly crispy slices.

If you want less crispy bacon, set the temperature to a lower temperature and adjust as needed depending on your personal preference for how crispy you like your bacon. If you’d prefer very crispy bacon then set it to a higher temp.

How long does it take for bacon to cook in the oven?

However, it’s important to note that the time it takes to cook toaster oven bacon will vary depending on the thickness of the slices and the temperature of your oven. If your bacon is particularly thick, you may need to increase the cooking time by a few minutes. And if your oven is on the cooler side, you may need to cook the bacon for a few minutes longer.

So there you have it. The definitive guide to perfect baked bacon in a toaster oven. It’s simple, really – just follow these steps and you’ll be enjoying crispy, delicious bacon in no time at all.

We recommend this Mueller Stainless Steel Toaster Oven that makes your favorite breakfast dishes with bacon, eggs, and hash browns. It’s so easy!

But remember, always use caution when working with hot ovens and other kitchen appliances; safety first, guys. Now get cookin’!

How To Reheat Fried Chicken In Air Fryer

Can Wax Paper Go In The Oven? Everything...